WIFL HAS TEAMED UP WITH WASUP GIRLZ TACKLE FOOTBALL LEAGUE!!!

Las Vegas, NV – November 29, 2012 – – Commissioner Dion Lee of the Women’s Indoor Football League (WIFL) is making strides to bring awareness and notoriety to women’s sports by leading the movement for women’s tackle football. Since its launch in October 2012, WIFL has become an official supporter of the WASUP Girlz Tackle Football League. WASUP is a non-profit 503(c) corporation that was created to promote a full tackle girl’s football league focused on creating a positive, safe and fun environment for the girls who love to play football, much like the Pop Warner league for boys.
WASUP was founded by Commissioner Lee in early 2012 as part of his vision to develop a feeder program for the professional women’s leagues. The program will recruit and train young girls aged 8 to 18 to play football at a competitive level for little to no cost. With growing popularity of girl’s playing flag football, WASUP is giving those athletes an opportunity to increase their skill level and to be a part of the push for the girls to play tackle.
The WASUP program was pioneered in Las Vegas, Nevada with expectations to expand into 20 new markets in 2013. WIFL has adopted the opportunity to support the league’s growth and to follow the expansion footprint of the professional league.
This concept has never been done before and is an aggressive move for WIFL to have sustainability by fostering a young pool of athletic talent from which to recruit. This will increase awareness across the U.S. and around the World of the movement for women to play a traditionally male-dominated contact sport, growing the fan support, and ultimately putting women’s football on the map.
WIFL’s commitment to the WASUP Girlz Tackle Football League is a portion of revenues generated through franchise sales and sponsorships. The proceeds will be used to subsidize the cost of player registration fees, uniforms, football gear, and travel. WIFL will be co-branded with WASUP as an official supporter of the non-profit.
About WASUP Girlz Tackle Football:
The league is divided into the Elementary Division (grades 3-5), Middle School Division (grades 6-8) and High School Division (grades 9-12) so that girl’s will play with their appropriate age groups. There are currently 12 teams in the Las Vegas/Henderson market that are looking for players. WASUP Girlz Tackle Football is open for online registration at http://www.wasupsports.com/ for the 2013 season.

Aminah Barrett is only one of the seven girls in the city of Houston that plays football with boys. She attends Twin Creeks Middle School.

The eighth grader receives solid A and B grades and has been playing since the fourth grade.

“I like playing linebacker,” Aminah told KMOV St Louis. “I like to hit people and be aggressive.” Aminah is also a running back.

When her teammate Colton Mangum saw a girl with them while they were getting their pads, he thought, “‘Oh, okay so this is different.’”

Click here to watch video of Aminah in action.

This is what I like to read! Keep up the great work!

The #1 Women’s Football Info Board

Check out the discussion ‘Is it me??? Or is the WFA stats wrong???’

I was checking out the WFA stats for this week and noticed that my players stats seem to be doubled up????  Was wondering if anyone else st…

Connect with the best women’s football teams and players in the world. Get to know your favorite players and coaches here on the WTFG board

“The newest kid on the women’s sports block is finding that the old formula for attention-getting is as robust as ever. ‘Sex sells,’ says Atlanta Beat defender Nancy Augustyniak, who was astonished to learn she finished third in a Playboy.com poll of the sexiest female soccer players.”   —Wendy Parker, Atlanta Journal-Constitution

Last winter, champion alpine skier Lindsey Vonn won the downhill gold medal at the Vancouver Winter Olympics, the first American woman to achieve gold in this prestigious event. From 2008 to 2010, Vonn also won three consecutive World Cup championships, the first US woman and second woman ever to accomplish such a feat. For her unprecedented achievements, Vonn was named Sportswoman of the Year by the US Olympic Committee.

Even Sports Illustrated—notorious for its lack of coverage of women’s sports—couldn’t ignore this historic moment and devoted its cover to Vonn. SI’s cover, however, blatantly portrayed Vonn as a sex object and spoke volumes about the rampant sexual depictions of women athletes. Rather than emphasize her singular athletic talent, the magazine depicted Vonn in a posed photograph, smiling at the camera in her ski regalia. What was most noticeable—and controversial—about the pose was its phallic nature: Vonn’s backside was arched at a forty-five-degree angle while superimposed over a mountain peak. 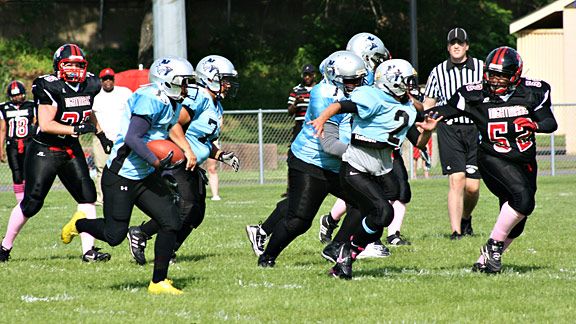 Andra Douglas The New York Sharks run the ball against the New England Nightmare in a game in the WFA, where players must pay to play.

While the NFL and its players were meeting in fancy Park Avenue boardrooms deciding how to divvy up $9 billion, the players of the Women’s Football Alliance were running routes on the gridiron for a more valuable reason — love of the game.

And love, it turns out, isn’t free. Participation in the WFA is contingent upon meeting a $1,000 player fee, which is required of all athletes who want to play.

"To have to go through so much effort to play is frustrating," said Lauren Pringle, wide receiver for the New York Sharks, the WFA’s oldest team, having begun as a member of the Women’s Professional Football League in 2000. "To see [NFL players] fighting over millions more dollars than they already have is upsetting. What they make in one game could fund our entire season. Heck, they could give us the change in their couch."

The WFA, which began play in 2009, is a nationwide league of 60 teams in the United States — but this is not your mother’s powder puff gang and it’s light-years away from MTV’s scantily clad "Lingerie Football League." The WFA gives everyday women with the financial means the opportunity to participate in full-contact tackle football.

Fees vary for each team and cover the cost of equipment, field rentals, travel and other team needs. Because athletes have to meet fee requirements, they maintain jobs off the field. With the 44 players on the Sharks, occupations range from student to project manager to information technology specialist.

Despite all obstacles, players of the WFA can’t see their lives without the game.

"One of our teammates told a New York Giants player she played in the WFA and didn’t get paid. He asked, ‘Then why do you play?’" said Sharks quarterback Karen Mulligan. "He forgot about the love of the game."

Pringle added: "I played a lot of softball and track growing up but never loved a sport more than I love football."

Because there’s no salary to be had, players get into the league for a variety of reasons.

"Three years ago the roller-skating-themed movie ‘Whip It’ was released, so I was searching the Internet for local roller derby teams," said Sarah Schkeeper, a Sharks guard. "The ad for the New York Sharks kept popping up on the website so I decided to check it out."

Sharks fullback Yatia Hopkins had a more conventional reason: "I played basketball throughout high school and played football with my brothers when I was younger. When I graduated college I was depressed and getting fat so one of my friends told me to try out for the WFA team."

These women were forced to make a huge financial decision by joining the Sharks, one of the most expensive teams to maintain because of the Big Apple’s cost of living. It costs approximately $100,000 to maintain the team during the regular season, according to Sharks general manager Crystal Turpin. Poor ticket sales — $2,000 per game for the Sharks — and lack of sponsorships keep most WFA teams, including the Sharks, in the red.

Few teams are fortunate enough to garner enough money and wins to make it to the playoffs. This season, the San Diego Surge take on the Boston Militia in the WFA championship game on July 30. The New York Sharks were eliminated in the first round, which was ironically fortunate — they no longer had to worry about funding trips deeper into the playoffs. Squads have forfeited playoff games due to insufficient travel budgets.

Bickering NFL owners and players could learn something from the women of the WFA, who have no price for their pigskin passion.

"Honestly, when I listen to NFL lockout discussions I’m jealous," said Pringle. "It pisses me off that they don’t appreciate what they have. If I could play football full- time and just not have to pay, I would be a happy woman."

The #1 Women’s Football Info Board

One thing I like about the LFL, this is plenty of folks wanting to do interviews on a weekly and the season hasn’t even started!!! Check it out!!!

As Las Vegas Head Coach Dion Lee prepares the Sin for the franchise’s first season, one thing is certain according to the first year genera…

Connect with the best women’s football teams and players in the world. Get to know your favorite players and coaches here on the WTFG board